I’ve found out about GTD around 2008 and tempted to try it out, I’ve checked what Macs apps are available for that. Technically not all these apps are 100% GTD but more on the ‘task management’ side.

After a short research I picked OmniFocus at the beginning of 2009. Since I don’t follow all GTD rules, I used is mostly as a “glorified to do list”, installed on the laptop only. I added a couple of tasks and projects and started to tick them off. It had recurrent tasks (which were used to keep track of my haircut schedule), folders/projects (to store lists of appliances/gadgets to buy or the debts like the car loan).

When Andy from Potion Factory launched the first beta of The Hit List, I gave that a try too. I preferred the UI design to OmniFocus’ one. It also had folders/projects and recurrent tasks. It even came up with a setup project meant to showcase the best of it. On the preferences pane it has a tab called iPhone Sync - coming soon. One of my reasons was the hope that the iPhone client would come soon enough (2-4 months) and it would cost less then OmniFocus for iPhone (was hoping for $10). As of today, there is no iPhone app (and no news about it).

In this period of time there was another application available: Things (from Cultured Code). The couple of times when I checked it, it lacked recurrent task and a way to make tasks available only from a certain date on. It didn’t manage to convince me to switch away from THL then. But because THL for iPhone is still in development, about a week ago I decided to give Things another try. Recurrent tasks look nice enough and there is a way to add tasks that are visible only from a certain date on. The prices of the iPhone/iPad apps are in the ranges I’m willing to pay. I got used to the way Things handles tasks (vs THL) and the future looks promising. I’ll give Things a try until the end of August.

I don’t want to complain about Andy’s silence period. He’s a one man indie shop and that makes it easy to throw his work schedule of the track. After all, on my screensaver project things are not moving as fast as I’d like to.

Since it was somewhat clear for me that I should replace THL, I tried to get back to OmniFocus, but I can’t get used to its user interface and work flow.

What I’ve learned from this story is that I should not buy a product based on the promises of “coming soon”. Probably I’d be much happier if I have had paid $20 for OmniFocus for iPhone and use it on a second device for about one year instead of being cheap and switching to The Hit List and now to Things. On the other hand, I really enjoyed these later two programs.

For other interested persons, I’ve attached a comparison screenshot with my pet peeve, recurrent tasks. 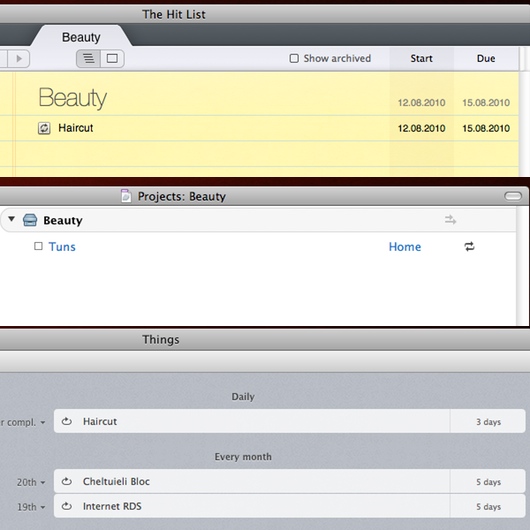